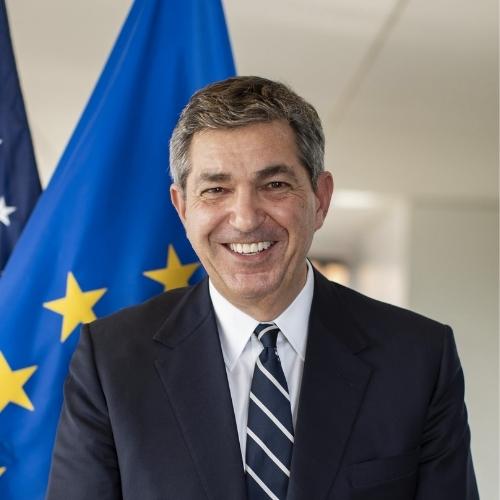 Stavros Lambrinidis is the Ambassador of the European Union to the United States, as of March 1, 2019.

From 2012 to 2019, he served as the European Union Special Representative for Human Rights.

In 2011, he was Foreign Affairs Minister of Greece.

He served as Ambassador ad personam of the Hellenic Republic (1999-2004) and as Secretary-General of the Greek Foreign Ministry responsible for Diaspora Greeks (1996-99).

Between 1988 and 1993, he was an Attorney at Wilmer, Cutler & Pickering in Washington, D.C., specializing in international trade, transactions, and arbitration.

He has received numerous recognitions for his work on human rights and privacy, including the Electronic Privacy Information Center’s “Champion of Freedom Award” in 2020 and the Boston Global Forum’s “World Leader in Artificial Intelligence Award” in 2021. He is a member of the President’s Council on International Activities at Yale University and a former president of the DC Bar Association’s Human Rights Committee.

Mr. Lambrinidis was born in Athens, Greece in 1962. He received his B.A. degree in Economics and Political Science from Amherst College (1984) and his J.D. degree from Yale Law School (1988), where he was also Managing Editor of The Yale Journal of International Law. He is a 1980 graduate of the Athens College High School in Greece. He is married and has a daughter.